After quite a long break, Tigerduck and me attended the HomeCon this weekend. So finally I found the time to test my 1st price from the Silly Venture competition. It contains a VBXE expansion which acts both as memory and graphics expansion. Unfortunately the additional plug was no standard VGA plug as expected, so I was not able to run VBXE games. But the memory expansion works fine, so I could test one of my forthcoming demos on the real hardware. The rest of the day we spent playing Robix in two player mode and finally defeated the first end boss. And as a special highlight for me, I won Rally Speedway against Tigerduck this time. The photo was taken by Boris, the issuer of the RETURN magazine, to whom I gave a short presentation of WUDSN IDE. Maybe I'll create an article for the mag with a short tutorial on the IDE. 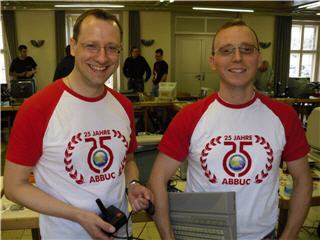 My "Silly Things" demo scored 1st place in 8-bit competition at Silly Venture 2010. And I remember that when Grey/MSB told me that LaResistance is also going contribute an entry to the competition my thought was "OK, it's simply no use". Now I finally managed to create fixed version and the "Fast Mix" of the demo which contains even faster and smoother effects. So if you like it, I'd be very happy to get your feedback on Pouet where you can also find the download with all versions. Here is the capped.tv recordings of the fast mix. 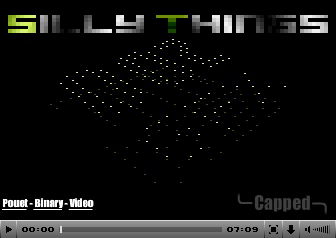 This weekend my new demo "Silly Things" was shown at Silly Venture 2010. At least I hope so, because unfortunately I was not able to join the party and know nothing about the results yet. This is the first time I entered a demo competition - after 21 years of demo coding. But thanks to be wife - who supported my during the 3 months of development - and thanks to 505 and OOZ who provided the music and the graphics, this became what it is now: my best demo so far. I just can't tell you how excited I am to see how the competition will end.

So if you like it, I'd be very happy to get your feedback on Pouet where you can also find the download. Here is the capped.tv recording. 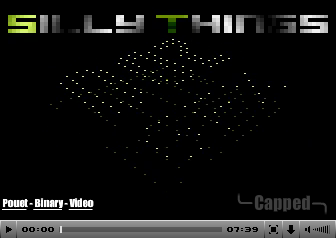 This version has Eclipse 3.6.0 as minimum requirement. See the tab "Installation" for the description and the link to the Eclipse download.

Here it comes, the last version of WUDSN IDE which is downwards compatible Eclipse 3.4.2. All subsequent versions will require Eclipse 3.6.0 at least. Of course you can already update Eclipse to version 3.6.0 now to benefit from the new features like block selection mode.