A computer that is very powerful and yet simple enough so you can learn the meaning of every single bit has always fascinated me. That's why I love my Atari 800 XL. The A.B.B.U.C. is the Atari Bit Byter User Club and is dedicated to the Atari 8-bit computer line (Atari 400/800, Atari XL, Atari XE). It was founded in 1985 and grew to several hundred members over the years. My passion for the 8-bit computers survived the 16, 32, and all following eras and has been a central part of my life.  Today around 400 users from all over the world are still members. We have an annual convention with software and hardware contests and many frequent regional meetings. Recently I ask the leader of our club when I joined and I was a bit surprised that it was only in 1992, 7 lonely years after I first got my Atari. But the important sentence has not changed until today "Do you write your own programs: Yes, man, I don't even know how to spell the word 'play' ". 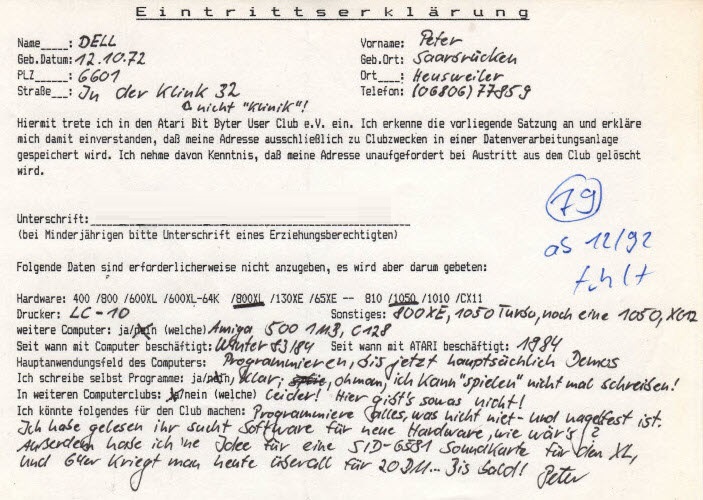 Back in 1992, I was sitting in my room together with my friend Erwin Steif. There was a demo group called "Visdom" which produced demos for the Amiga and I was the "8-bit guy" in that group. I always tried to port the latest releases of my friends from the Amiga to my Atari, just to keep them angry. That day I was using DPaint 3 on my Amiga 500 to draw the "Visdom" logo you can see above. After a while, I was very satisfied with the result. Then I left the room just for two minutes and when I returned there was no longer "Visdom" on my screen, but Erwin had all the letters mixed and mirrored. It looked like the drawing of a three years' old nerd who hit the mouse and the keyboard for the first time and it read "WUDSN". So Erwin smiled at me and announced: "I have just founded the first demo group which only consists of people who don't know how to code". Because I created the basis for the logo (actually I had to draw it again because my version had not been saved...) I became an honorary member of "WUDSN". Note that all this has absolutely nothing to do with the Waseda University Doctoral Student Network (WUDSN), except that we share the same acronym.

Thanks to Thorsten, the webmaster of www.nizagam.org for creating the following absolutely cool impression of this historical moment of 1992.

Why did you create WUDSN IDE?

I've been working with Eclipse as IDE for more than 5 years now. When I was in a different company, one of my team members created a small Eclipse plugin to integrate our repository and our pre-processor with the IDE to simplify the life of our developers. Meanwhile, I am working for SAP and have no way of coding Java anymore at work, so I tried at least to code some Atari demos when I'm late in the office. But I could not find a reasonable, free editor which was legal and able to run ATASM (under Vista the output could not be captured). And then one day a colleague told me "Look I have created an editor with syntax highlighting and code completion in 1 day based on the 'xText' domain-specific language (DSL) tool from openArchitectureWare . That was the day when my idea was born and two weeks later there was the first version for ATASM. Thanks to Alexander Nittka for that. But it was incomplete and the way the ATASM/assembler syntax work is quite different from today's XML-like languages. As a result, I got stuck. 4 weeks later my hard disk reported a physical error and then never reported anything again. All sources were lost. Today I call it good luck because I had to start all over and now have a quite good experience in what can be done in Eclipse easily and how. I also found the ASMPlugin for Eclipse on SourceForge. This plugin is targeted at x86 development on PC and it was the template from which I started to create my own plugin. Thanks to Andy Reek and Daniel Mitte for that. Meanwhile, the IDE has matured and thanks to the continuous development of the excellent MAD assembler (MADS) by Tomasz Biela (tebe) and the excellent Altirra emulator by Avery Lee (phaeron) it now represents probably the best cross-platform 6502 assembler IDE. Most features like content outline, hyperlink navigation, and content assistance for opcodes, labels, macros, and so on were only a faraway dream when I started, but now they are for real and they become better with every release.

Where can I find answers for problems regarding WUDSN IDE?

First, you should check the FAQ section on the WUDSN IDE tab. If you cannot find the answer there, you can use the corresponding threads I have created in the English AtariAge forum or the German ABBUC forum. Of course, you can also just write an e-mail to

Which hardware did you own back in the 80ies?

I started with a Sinclair ZX 81 which I bought from the money I had collected within one year. Then it broke, I wanted to buy a Sinclair ZX Spectrum. But it was sold out in the store. And because I didn't want to return back home without a computer, I turned around and pointed at the next-best-looking computer and bought it. It was my Atari 800 XL - and the rest is history.