The "Visdom" demo, called "Visdom I" after the release of "Visdom II" was coded on the Atari 800 XL with ATMAS II. The idea of the demo was to port my favorite C64 intro (cracktro actually) by the "Hotline" crew to my machine because I simply loved the style and the "smooth criminal" tune. Since I never was into composing sounds and didn't know much about creating sounds I had a problem. But there was an Atari Basic listing for a tune named "Honkey Tonkey" in some printed computer magazine that I bought in the super market and so I ported the replayer and the DATA statements into assembler. Maybe one day I'll find out the original author and send him some regards. See the Atari version versus the C64 version below. 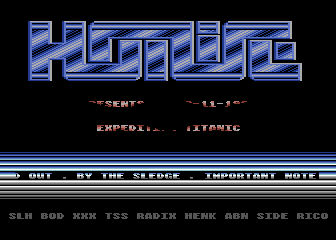 The second part of the "Visdom I" demo was the result of a "coding battle". I already had an Amiga 500 at that time and some friends of mine, who also were coders, had started to create demos on that machine. So the group "Visdom" was an Amiga group of 5 people and I was the "one man Atari division". We had meetings every 3 or 4 weeks where the guys showed their progress in their Amiga Demos and the latest stuff they had received from other groups. Well, and I always tried to port their achievements to the Atari XL until the next meeting. And I won this "competition" quite often and it really was fun (and beer). One day they presented the new Megademo from the "Royal Amiga Force" in 1989. I was amazed by the demo and immediately tried to port is to my Atari. Here is the download of the executable. Press the space key to move the logo. If you look at the lower left screen shots you will find the waving "RAF" logo in front of the copper bars. And since most of the other guys came from C64, they were stunned by the large waving logo and any distortion effects with more than 4*8 pixels. So I decided to create a demo that could not be done an C64 and looked like this part of the RAF demo. The first version actually had an "RAF" logo, but I changed it (since R.A.F. is the short form of a former German terrorist group ...) as soon as I had designed my own logo in DPaint. 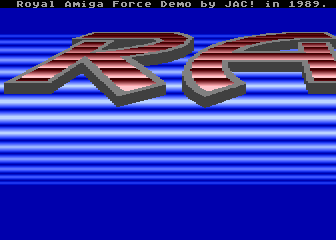 The final version was done for our on meeting 04-05-91. Because I didn't have any other Atari contacts at that time I decided to send that version including a small note intro to the "Disk Line" disk magazine from PPP (Power per Post) but I don't remember that I ever got any feedback. 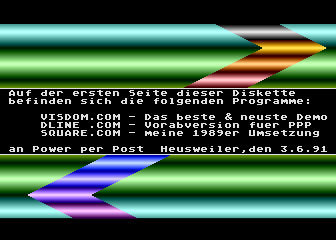 Despite of this, people from all over the world contacted my years later because they had somehow received that demo. That was really funny to me. Some weeks ago I came across an article by Heaven the the ABBUC Magazin 46 where he wrote about coding scrollers in the demo corner. There he mentioned the "Visdom" demo for having a graphics 0 scroll with single pixel resolution and that this probably is an example of heavy bit shifting. To be honest, this single pixel scroll takes no more additional cycles for the single pixel effect. Every 8 pixels, the screen memory is shifted. Every 2 pixels the HSCROLL position is changed and for the single pixel resolution, I exploited that every 8x8 charset is actually a 7x7 or 7x8 charset, at least for all normal characters like letters or digits. Otherwise adjacent characters would stick to each other. So the initialization simply creates a second charset which is shifted 1 bit to the right and this charset is used for the odd pixel positions. Resulting in about 10 additional cycles for this in the DLI.

Meanwhile I also found some minor bugs in the demo and its successor. Fixed versions can be found on my web site. To be honest all bugs amount to the same root cause: I only had a quite bad color TV set at that time, so some flaws were simple not visible. But todays emulators and screens are merciless in this regard and I don't want to be blamed for a dutch color scheme after all these years ;-)

Recently I also found and nice external reference on Page 6 : "Requires enhanced density drive. Another selection of demos from the Continent to show off the power of your Atari. The first is from Visdom with an excellent massive scroller with bendy letters and a rainbow added to the massive logo, obviously this is the source for the even better Visdom demo on The Halle Project. Next up Is a desktop type screen with messages scrolling in every possible direction. This is followed by an extremely busy screen with every type of scroll imaginable taking place at the same time. Four more demos include many bouncing effects and some great music and in one pressing the space bar gives access to a Ninja type game (although we're not sure if it is actually playable). Overall a nice disk, not as strong as some, but still with plenty to impress you and your friends."