What started out at HomeCon 3 as party coding to show that modern laptops are really useful peripheral devices for 8-bit computers is not finally completed: A real invitation intro for the HomeCon 5 party. As you could imagine it runs on an Atari 800 XL and was created using WUDSN IDE. The executable, the sources, and the video have been published on Pouet. There I got quite a lot of positive feedback and finally, my neat little production went up to 5th place in the "top of the month" on 2010-02-02. That's what I call product placement ;-)

Isn't it great that there are non-movable dates? New year's day for example is always on the first of January. And for some years PPS has been collecting everything that the Atari fan community has created regarding X-mas, new year's day, and anything else in the world that has 8 bits. This means pictures, sounds, games, and demos. All that is compiled on one disc and then published for free as the New Year's Disc. It means a pretty variety for the "retro spare time" at the turn of the year. This year I had decided to take part in all this it soon it was clear what should be the contribution. It had started some time back...

At the HomeCon 3 party, I tested my 6502 IDE for Eclipse in a production scenario. That meant creating some real executable Atari code instead of playing around with the IDE itself. Complexity did not have to be too big since the few hours of a HomeCon party are over quite fast. Fortunately, I have quite a lot of unfinished and never-released effects from my hyperactive time 1990-1994. Many of these effects are conversions of Amiga Demos of that time. Of course, because firstly I had an Amiga, and second those were the demo years. So my choice was the "Rainbow on Mars" sequence from Joyride by Phenomena. This one allows the Atari palette to show up nicely. A demo tune was also found quickly since about one year ago 505 from Checkpoint had sent me a disc with his creations. Then I painted the HomeCon logo on checkered paper and added the 2-bit-planes fading effect which I had always wanted to create.

Where the ... is that charset now and why is the executable now loading properly, aargh, I have overwritten the DOS area, and now it is jerking because there's not enough raster time left ... after about 5 hours the whole thing was done, and working on the real hardware. So I swiftly took a picture and a small video and then HomeCon 3 was over and almost nobody had seen the production at all. Well, damn. Finally, I failed in uploading the video due to its file format and I failed with all the rest due to my missing spare time... 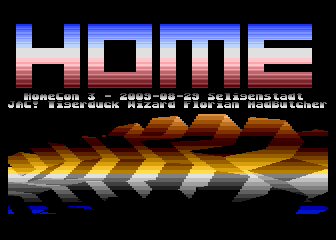 That meant I had some partly finished but not ready for release - as always. That really annoyed me. So I decided to turn the quick hack into a real release for the New Year's Disk 2010. I sat down after X-mas and reworked the whole thing: I replaced the tune, changed the loop into interrupts so the effect can run in parallel, added two scrollers, added up-scrolling of the rainbow effect, added fading for the logo, reworked the color scheme, wrote the scroll texts, synchronized the texts and the music, ported to inflate routine from FOX to ATASM to compress the rainbow animation (32k to 8k), created the loaded, optimized everything so it also works on NTSC. Done. It is 2010-12-31 at 17:45 and I am DONE. Even before the deadline- I could hardly believe something like this happened in my life. At this point, I really like to thank Nils for the great tune and above all to my wife who encouraged me all the time to get this one done.

On 2010-01-01 the New Year's Disc was released and in parallel, I uploaded the executable, the sources, and the video on Pouet. And since that day I am as happy as a child when somebody adds a comment, a thumb, or a view.