GEOS is a disk-based "Graphic Environment Operating System" for the Commodore C64 and Commodore C128 computers. To speed up the boot process and the task of switching between programs on a Commodore C128, parts GEOS can be put into a 32KB ROM. This ROM can then be installed into the internal function ROM slot U36. 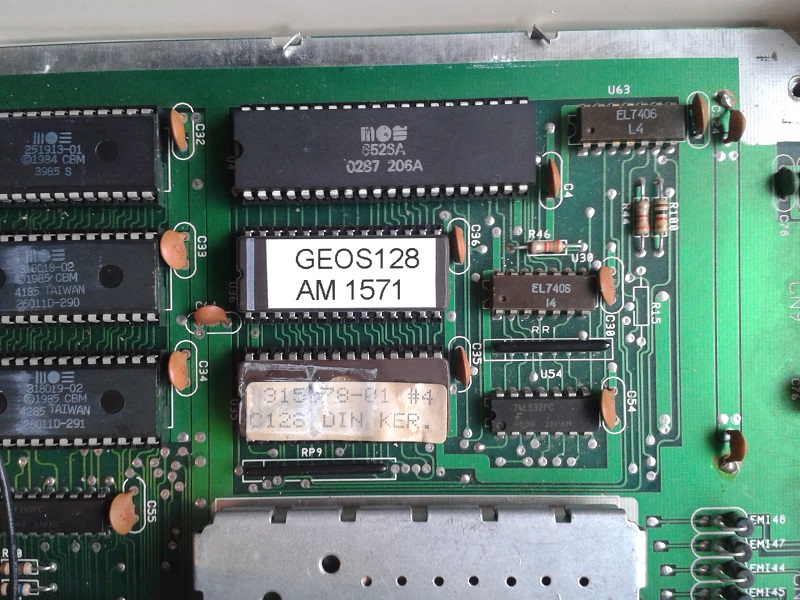 This is the text from the original readme by the creator of the ROM:

"Burn one of these files into a 32k EPROM and insert it into the U36 socket in C128. You can bypass its execution by holding the RUN/STOP or C= key during power-up or reset. It will drop you into the machine monitor (C128 mode, exit by 'x') or into C64 mode.

These three files contain GEOS Kernal only. You still need a boot disk with at least Desktop (but existing auto-execs will be executed before that). Boots always to 80-column mode and not much can be done about that. It is somewhat tuned to have a centered screen on my TV set so you might have problems with the visuals. Anyway, after the Desktop is loaded - press RETURN two times and you will switch into 40-column mode.

They contain raw data, there is no load address."

You can download the full set of GEOS 128-V2 disk images, ROM images, and ROM chip labels from here.

You can see the effect of the installed ROM in my video Booting GEOS 128 with GEOS Function ROM on a Commodore 128.

If you don't have the possibility to burn the EPROM yourself, just choose which version you require and send a short mail with the subject "GEOS 128-V2" to jac at wudsn dot com. I can burn the EPROM on request and send them.

If you have questions regarding GEOS and how to use it, please ask your questions in a Commodore forum. I am not a GEOS user myself, I only provide the EPROMs as a service.