An Atari 8-bit demo by Lucy, MotionRide, and JAC! for Silly Venture 2k18 with the following unique selling points:

I started this one in 2013 when FLM released the first conversion of the Bad Apple video for the Sega Megadrive.

As probably every coder on a low-end platform, I started thinking about how this great video could be best transformed my most beloved hardware. So I downloaded the video and started to play around with it, analyzing its structure and complexity and thinking about a way how this could be made possible on the Atari 8-bit computer.

Over the years, Bad Apple advanced to the modern "Hello World" for the retro computing demoscene. It has been converted to even the most obscure platforms including Atari VCS and Vectrex, often with very interesting and unexpected results. The creators of most versions set themselves the constraints they wanted to do their "personal" version of the demo. Of course, given the amount of data for 3:39 minutes of video, everybody used modern storage devices. I mean everybody except Algorithm, but I think that goes without a saying :-)

After experimenting with different screen resolutions and compression strategies, I finally had a working version in 2016. It didn't have sound yet only worked on the emulator, because it used the unlimited speed of the emulator when loading multi-segment executables from the host drive. But of course, my aim was to run this on the real hardware. Maybe even have cartridges produced by Atariage or something like this. Hence I targeted the 4 MB cartridge from Bigben. This was the same size as the video data in the original version, so it seemed enough and was supported by emulators.
But after some attempts in different directions, it turned out that nobody could produce this cartridge anymore because the chips used were no longer available or too expensive now.

The next idea was to use "The!Cart", which offers up to 128 MB. But there are only 100 such carts in the world, so the target audience was very limited.

In March 2016, playsoft released his version for the Atari 8-bit computer on AtariAge. Damn, he beat me to it. He was the first. Yet the conversions were straightforward bitplane compression and the frame rate was very low. The unique features of this version are the different resolutions and the music by Dhor.

In June 2017, R0ger released his version for the Atari 8-bit computer on AtariAge. Honestly, I was totally shocked. This version uses a standard 1 Megabyte / 8 Megabit Atarimax cartridge. It has a very nice POKEY conversion of the original tune and wonderful artwork by PG. The unique features of this version are the different visualization options, karaoke mode, and the beautiful end screen. It is definitively the best you can achieve within 1 MB.

Finally, at SillyVenture 2k17, a Bad Apple version for the Atari ST was presented, and I felt the air was getting thin. So SillyVenture 2k18 definitively had to be the release date for my version.

At Fujiama 2018, with the great help of Insane, I managed to completely automate over 20 previously manual steps of the conversion process from the original video to the Atari executable. With this, I could verify that the Atari is by no means capable of unpacking the data at the framerate I wanted. Actually, with the full overscan resolution that I was targeting, the ANTIC keeps the CPU blocked the majority of the time.

Because of this, and because of another 100 pieces of The!Cart had meanwhile been sold with even more to come, I decided to go for The!Cart. I wanted to push the quality to the maximum, no matter how much space that takes. After all, this should be a showcase of what unique things the Atari 8-bit hardware can do without modifications:

When I finally had the ROM working in September 2018, I saw a video posted by MotionRide on Facebook. I had met him and his wife at last year's Silly Venture. This style of animation was exactly what was missing to introduce the history of my version to the audience. Without it, it would just be a tech demo, nobody was able to understand or judge. But with it, it would be the best 1979 Atari commercial that never was.

So I contacted him on Facebook, created a script describing my ideas and we spent the next 4 weeks chatting, skyping, discussing uncounted problems with resolutions, frame rates, audio issues, bitrates, and sending updates and tips.

Ultimately also an outro part was added. It is based on the famous end screen of State of the Art demo by Spaceballs on the Amiga 500. The demo won the The Party amiga demo compo in 1992 with a presentation that was unprecedented. The whole demo was a movie and streamed from the disk, just like Bad Apple HD streams the data from The!Cart. And just like "the real coders" back then stated "How could this demo win?? Lame programming and a useless track loader.", there will probably be people who will say just the same about this version. On the other hand, "State of the Art" is one of the most remembered demos on the Amiga because it simply looks and sounds f..king great even by today's standards. And looking at the 1979 hardware I've been using here, I am very proud of the result of the 5 years of work that went into it. Special thanks go to Tigerduck for his external Soundblaster and biobern for his Dual C 820 on which I was able to record the tapes and for his support in recording the live video. 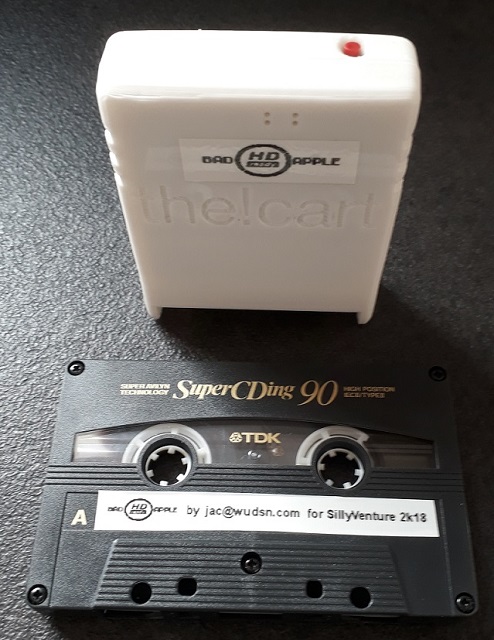 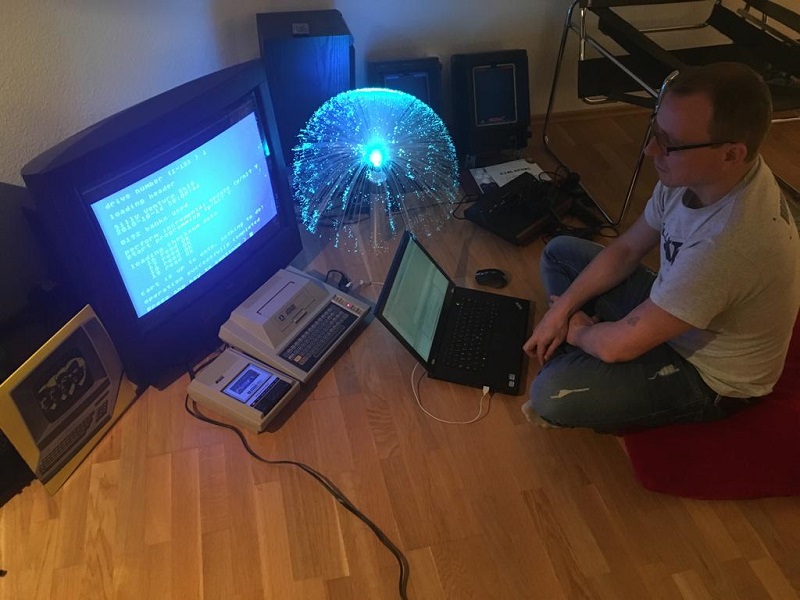 Running the demo in emulation

Running the demo on real hardware